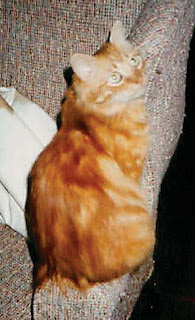 My mom lost her cat to cancer this week. Chelsea Marmalade Blanche DuBois was a good companion and friend to my mom for fourteen years. We miss her very much.

When Blanche was brought to my mom, she had already been a mom, and traveled across the US. Aunt Ginny (who, incidentally, also gave us Luna and Ellora) had saved her from an animal shelter with the promise that "Chelsea" would be an indoor cat. All of Blanche's kittens had already been adopted, and she was being threatened with euthanasia- so that nine life thing may hav some truth to it after all.

Aunt Ginny travels with her animals, so Blanche joined the travelling family. However, she soon proved unfit for such a life. She would escape and hide on roofs and in closets, and provided ample evidence of neurosis. She hated the other animals. It just wasn't working. Aunt Ginny knew my mom had a nice, quiet house. We had lost our former long-time pet, Hubert Magic Mitten ("Kit Kat", or more usually, "Cat") in the spring. He was 17, and had a series of strokes. So Aunt Ginny brought the slender, long-haired beauty to the country, and my mother, for Christmas. Merry Christmas, Mom!

Her long orange hair and status as a mother lead my mom to initially dub her "Marmie" (Marmalade for the orange, and marmie after Little Women). However, it soon became apparent that the cat was absolutely nutso. She would hide for days in mom's closet, without food or water. If you made eye contact too soon, she would hide somewhere else and emerger several more days later, emaciated and exhausted. Mom learned to locate her without making eye contact, and leaving water. Then she would hide in the basement for weeks. If you called her, she would only answer if she thought you could see her (even if you couldn't). Again, callingtoo soon meant several more days of hiding. This was no Marmie. This was Blanche DuBois- depending on the kindness of strangers!

But as the calm of my mother and her home settled on Blanche, and she calmed down. She hid less and less, and finally stopped such insanity. Instead, she preferred ot sleep near my mother's face, one paw upon her cheek. Even when Mom was ill, sleeping out on the couch instead of bed, she would come and see where Mom was, and sit with her. They talked. Marmie (Blanche and Marmie became interchangeable names for her, depending on her mood) would want to know who was on the phone, demand her breakfast, demand that Mom come to bed. Blanche or Marmie, she and my mom were companions through thick and thin.

Six days ago, Marmie was eating a full can of food at each meal, being her usual bossy self. Then she stopped eating. She was otherwise acting fine, but she was losing weight. Two days ago, as she started looking thin, Mom took her to the vet and they took x-rays. Yesterday, the vet sat us down and explained that all that white we see in the abdominal cavity and chest cavity? That's cancer. Non-operable cancer, and chemo would buy her maybe three months- and not happy months. She was starting to have trouble breathing. She was at least 16 years old. It was time.

Thank you for being our friend, Marmie. We love you. We miss you. Blessed be.
Carefully crafted for your viewing pleasure by Joeymom at 8:59 PM

What a beautiful and loving tribute to a gorgeous kitty. She obviously brought your mother much love and joy.

Condolences to your mom. It's so hard to lose a beloved companion like that. And I love all the names. It makes me think of T.S. Eliot.