As we prepare for school to begin tomorrow, I would just a moment to say goodbye and thank-you to summer. 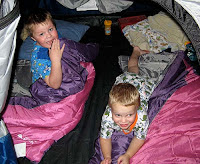 Thank you, summer, for helping my boys grow. Good bye, summer. We'll see you next year.
Carefully crafted for your viewing pleasure by Joeymom at 2:49 PM

What cuties! And what a rich, fabulous summer they had. Happy back to school!

You are so well ahead of the curve.
Best wishes

Off topic, but have you seen this?

Seems right up your alley.

Oh what a wondrous summer! Funny, isn't it, when you put it all down in one post you can see just how amazingly rich and wonderful it was.

Love and hugs to you all for a great first day of school!
xo

I'm so excited to see that your boys like pink too. =o)

Great post. Makes me wonder what we all learned this summer. Hmmmmm...